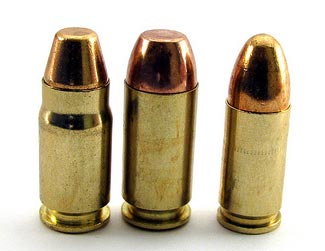 The uncommon but powerful .357 SIG round (left) combines the necked case of a .40 with the bullet diameter of a 9mm.

The TSA – the Transportation Security Administration – was formed shortly after 9/11/2001, and was tasked with taking over airport security screening duties.

Rightly or wrongly (more wrongly than rightly) it was felt that a government coordinated organization could better manage airport security than was the case prior to that time with private security firm contractors at each airport.  In understanding this, it is essential to realize that the box cutters taken on board the four flights that were taken over by hijackers on 9/11 were perfectly legal to take on board the planes.

The failures of 9/11 were two-fold, and neither was the fault of the private security screeners – the biggest failure being the policy of passively giving in to and cooperating with hijackers, and the second failure being arguably the decision to allow box cutters as carry-on items.

But in the panic after 9/11 and the need to blame anyone but themselves, the security authorities saw an opportunity to create a new massive government department and rushed to form the TSA, which then became part of what is now the third largest of all government departments (only the DoD and VA are larger), the also newly formed Homeland Security Department.

Anyway, enough of the history.  You know the TSA – you see them every time you take off your shoes and belt and shuffle through the security screening at any airport.  The TSA now employs about 55,000 people.

Although they’ve tried to make themselves look more like police, now with police style uniforms and shields/badges, the happy fact is that these government employed ‘rent a cops’ have no powers of arrest and are not sworn peace officers.

So how now to understand their publishing a tender for the supply of 3.454 million rounds of .357 SIG pistol ammo?  This sounds unbelievable, but you can see their official tender document here.  (Note they refer to .347 but it should be .357).

What does an agency made up of non-sworn non-police officers need with 3.454 million rounds of out-of-the-ordinary caliber pistol ammo?

Seriously, what do they want with this huge quantity of ammunition?  Can anyone tell us?

One Response to “Why Do the TSA Need 3.454 million Rounds of Pistol Ammo?”