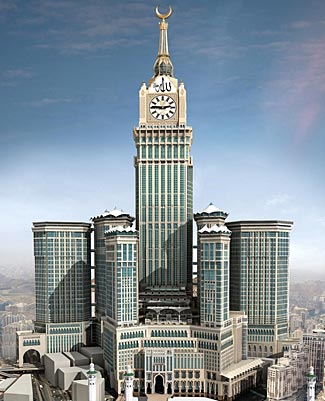 The Royal Clock Tower Hotel in Mecca (also known as the Abraj Al-Bait Towers).  At 1972 ft and 120 floors, it is the tallest building completed in 2012 and now the second tallest building in the world.

As we move into the new century, it is increasingly obvious that the 21st century belongs not to western civilization, but to other civilizations and regions.

That’s an unpleasant truth and hard for most complacent westerners to appreciate or accept, particularly when they close their eyes to the rest of the world and surround themselves only with those selected snippets of information that encourage their belief in the innate supremacy of the western cultural/social/economic system.

It is hard to measure the decline of the west, particularly when we are part of it ourselves, and surrounded by a version of reality that is unwilling to acknowledge our decline.  But if you travel the world (may I modestly say that I have) and particularly if you visit some of the new prosperous regions of the world, the difference between what we have come to accept and what is happening in the rest of the world is astonishing.  Why aren’t we being told about this in our newspapers and on our television programs?

Well, that’s a question with no answer, isn’t it!

One such measure of the economic winners and losers might be urban construction and development.  Here’s an interesting article that gives us a non-standard measure of the relative economic success and prosperity of cities in the world – skyscraper construction.  It lists the ten tallest skyscrapers built in 2012.

If you don’t want to go through the article page by page, here’s the list :

In case you’re wondering, you have to get all the way to number 15 before the west appears (Toronto), and number 23 before the US appears (Oklahoma City).  Then another long gap until Canada reappears at #34 and the US again at #45.

As for Europe, its first appearance is #39 (Milan), followed by Moscow (which may or may not be fairly considered as part of Europe) at #48.